Innovation isn’t lightning in a bottle — it’s a repeatable and scalable skill that your people and organization can learn and master. ExperiencePoint’s live, digitally-driven workshops offer one-of-a-kind simulations in human-centered thinking, immersing companies in an approach to innovation that anticipates customer needs and helps surface and develop imaginative solutions to drive organizational growth.

Join Melissa Huggett, ExperiencePoint’s Director of Partnerships and Sales, for a live, 45-minute webinar to learn how ExperiencePoint’s Training Method — founded on human-centered thinking — can help kickstart or propel your innovation journey.

Melissa will guide you through ExperiencePoint’s ExperienceInnovation™ | Learn workshop — ideal for teams aiming to learn how to bring human-centered mindsets and techniques to their real-world business challenges.

Join us to learn: 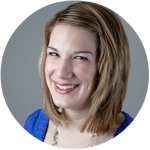 Melissa Huggett has always been a human-centered thinker. Growing up in remote British Columbia, her outgoing nature and passion for people propelled her toward a career in hospitality. She left home to pursue a Bachelor of Commerce in Hotel and Restaurant Management at Guelph University and immersed herself in all aspects of student life.

Upon graduation, Huggett secured a position as a Conference Manager at the BMO Institute for Learning (BMO IFL) — it was there that she became keenly interested in the world of adult learning and instructional design. She then accepted a position as Global Sales Manager for the Ivey Tangerine Leadership Centre — a role that would eventually lead her to ExperiencePoint.

While Account Manager was Huggett’s first role at ExperiencePoint, her talent and profound interest in human-centered approaches led her to become the company’s Director of Client Partnerships and Sales. Ten years into her time with ExperiencePoint, she is widely recognized as a fountain of human-centered design knowledge and a fierce champion of the ways in which the approach enables companies to innovate around their customers in ways they never thought possible.

Huggett is a frequent panelist on the topic of human-centered design and has previously been recognized as one of the MASIE Learning Center’s “Top 30 under 30.” She is the busy mother of a five-year-old boy, a self-proclaimed gym rat, a lover of Italian food and a proud, former karaoke host.